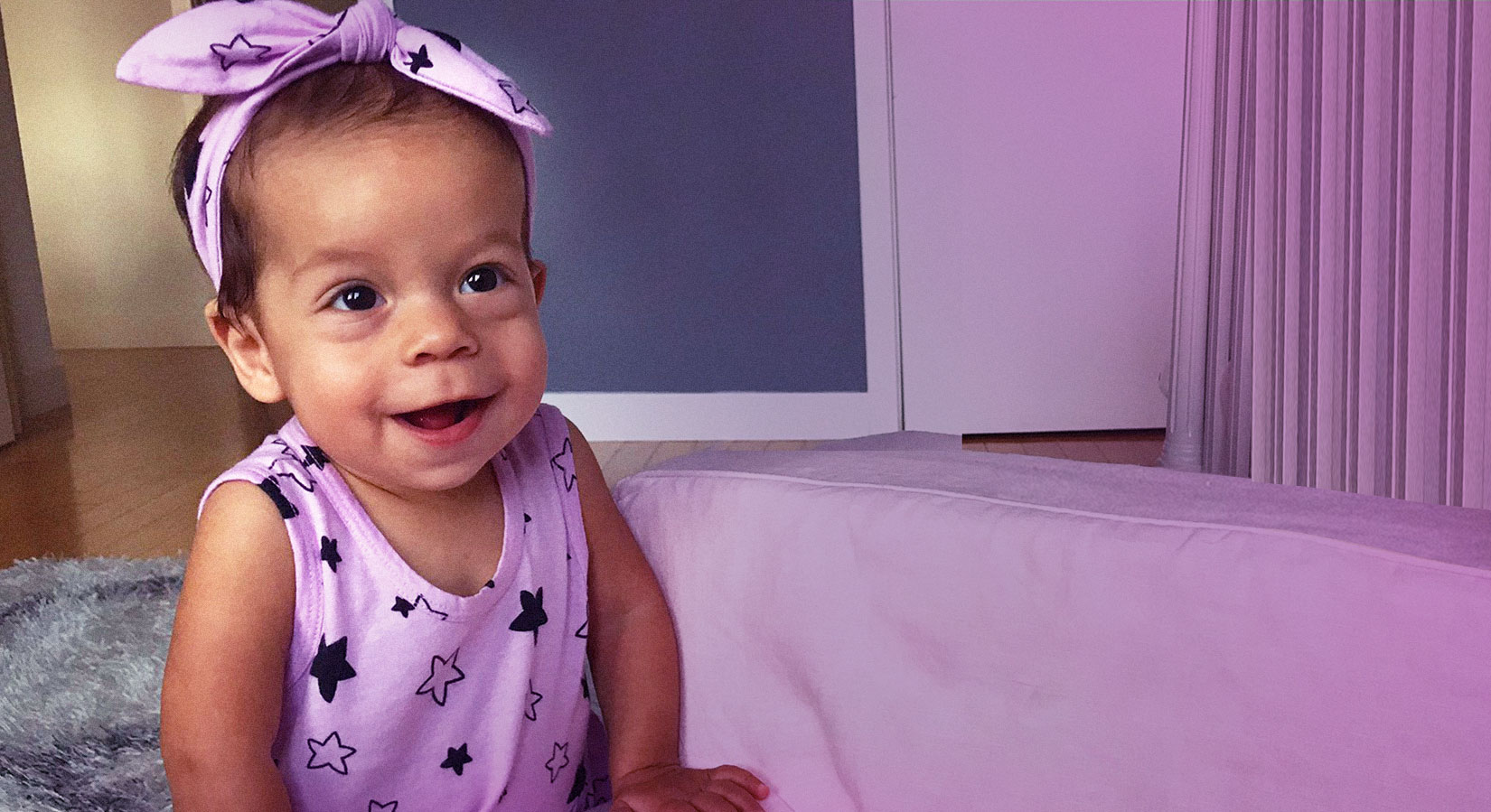 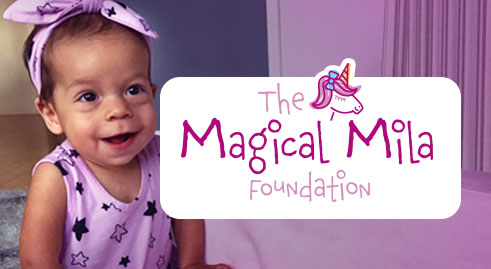 To raise awareness of NF1 and its manifestations, while also funding different pilot programs at the Children’s Hospital of Philadelphia for early detection of high blood pressure in high-risk children.

Mila was a 17 ½-month-old girl who had Neurofibromatosis Type 1 (NF1). At 14-months-old, she was diagnosed with mid-aortic syndrome and renovascular stenosis, vascular manifestations of NF1 that lead to high blood pressure.

To reduce the number of preventable complications associated with non-testing in infants, children under three and other high-risk kids.

Mila Gray Roomberg was born at 1:11am on September 16, 2017 to her very adoring parents, Jessica and Dan. At her one month checkup, Jessica asked about some cute birthmarks showing up in a pattern on Mila’s back. Her pediatrician looked at them and said they were something to continue to watch.

This was an immediate red flag for Mila’s parents, who scheduled appointments just a few weeks later with CHOP’s Dermatology and Genetics departments. At around two-months-old, Mila was diagnosed with Neurofibromatosis Type 1, a genetic disorder that occurs in one in every 3,000 births. NF1 is more common than cystic fibrosis and hereditary muscular dystrophy combined. Fifty percent of people with NF1 inherit the gene from their parents, but the other fifty percent of people are the first in their families to have the disorder. In those cases, it’s just spontaneous, and this is exactly what happened with Mila. NF1 does not run in Mila’s family.

Most people with NF1 live very normal lives; however, some people have a slew of symptoms that can include benign tumors growing on their nerves, vision disorders, skeletal abnormalities, learning disabilities, and in less common cases, vascular issues and high blood pressure. No two people who have NF have the same symptoms. In fact, some people with NF have no symptoms at all.

Jessica and Dan got Mila right into the Neurofibromatosis Program at Children’s Hospital of Philadelphia. Her doctors explained that Mila would now need routine surveillance every six months of her life to make sure she was doing ok. She would need an initial X-ray and MRI. She had her first sedated MRI in June 2018, when she was nine-months-old. For the first year of her life, Mila did not have any known issues. Her pediatrician and other doctors knew about her NF, but she was living a very normal life and came out of mostly every doctor appointment with flying colors. She was a happy, smart, thriving, vibrant and energetic baby girl who loved to love and be loved. She loved to dance, play, point, clap, read books and pick out her outfits and matching bows. She loved Bruce Springsteen. In fact, one of her first words was “Bru.”

When Mila turned 14-months-old, her parents took her to CHOP Cardiology for a follow-up-appointment for an unrelated health issue. Mila was born with a heart murmur, which is common in newborns. When she was a week old, the cardiologist at CHOP said he was confident that the murmur would go away on its own, but to come back in a year to make sure. Mila had an echo and an EKG. The doctor came in and said the echo revealed “something else.” He noticed that Mila’s aorta by her diaphragm was narrowed and he didn’t know why. He said he would need more imaging, and he made an appointment for a follow-up-MRI.

During that MRI, while Mila was sedated, her doctors took her blood pressure. It was 240/110 mmHg. Mila was admitted right away. In the weeks that followed, the ICU team, in addition to a team of nephrologists and cardiologists, diagnosed her with Mid-Aortic Syndrome, a very rare condition that narrows the middle part of the aorta (down by the diaphragm), causes decreased blood flow to the lower limbs, and high blood pressure. She was also diagnosed with Renovascular Hypertension, which meant her kidney arteries were narrowed and she wasn’t getting good blood flow to her kidneys. Both of these diagnoses were extremely rare manifestations of her NF1, and would eventually need to be fixed by a vascular surgeon.

There are only a few surgeons in the world who have seen and treated a diagnosis like Mila’s. So Mila’s doctors at CHOP teamed up with the experienced team of surgeons at the University of Michigan. They decided it would be best to hold off on surgery until Mila turned three or four-years-old. The long term plan would be to do a big operation; a bypass of her aorta and revascularization of her kidney arteries, once she was a little bit older and stronger. The short term plan was to treat her high blood pressure with medication.

Mila and her parents lived at CHOP for five weeks while her doctors came up with a cocktail of five different medications to bring down her blood pressure to a safe number. They spent Thanksgiving and Hanukkah in the hospital. And just before Christmas, Mila, Jessica and Dan went home.

The next few weeks were relatively normal. Mila did not have any restrictions, so her parents tried to make life as normal as possible for her, with the exception of taking her medications every few hours and taking her blood pressure a few times a day. Despite her silent, internal battle, Mila was mostly herself. She was playful, happy and kissed everyone. She pointed to her parents phones, letting them know she wanted to listen to Bruce Springsteen (“Tenth Avenue Freezeout” was her favorite). She was learning colors and letters. She could identify every body part. She could point out the smoke detector and the sprinkler in every room. She knew the pictures on her flash cards. She loved to talk. She could say over a dozen words, including “dog,” “cold,” “hot,” and “bus!”

One day, Mila got a cold and her blood pressure spiked. Her doctors decided she could not wait for surgery and it was time to come to Michigan.

Jessica, Dan and Mila drove nine hours to Michigan. Mila underwent a successful eight hour surgery to bypass her aorta and revascularize her kidneys. Hours after the surgery, there was a complication. When her surgeons went to fix her during an emergent procedure, she went into cardiac arrest and ended up on life support. Mila fought for one more day. She passed peacefully in the arms of her parents, surrounded by her family.

Mila’s high blood pressure and ultimate diagnosis might not have been detected, had it not been for that heart murmur and routine follow-up.

The ultimate goal of The Magical Mila Foundation is to raise awareness for non-oncological NF, while also focusing on properly detecting high blood pressure in high risk infants and toddlers, so that no parent has to feel the pain that Jessica and Dan feel every moment of every day.

Check back later for upcoming events and how you can get involved!

Historically, blood pressure readings have been difficult for physicians to obtain on younger children due to technology limitations and clinical difficulties of measurements in infants. The BP Under 3 Project at Children’s Hospital of Philadelphia is testing and piloting a new standard of care for measuring hypertension in high-risk children under three years of age.